Time to focus on a new project, courtesy of the Universities of Wales and of Glasgow:
"This four-year AHRC-funded research project, launched in September 2014 and jointly run by the University of Wales Centre for Advanced Welsh and Celtic Studies (CAWCS) and the University of Glasgow, will explore Romantic-period accounts of journeys into Wales and Scotland. Our focus is on the writings of the Flintshire naturalist and antiquarian Thomas Pennant (1726-1798), whose published Tours of both countries did so much to awaken public interest in the ‘peripheries’ of Britain. We aim to open a window onto the vivid and often entertaining accounts of scores of ‘curious travellers’ who headed for the edges of the British Isles in search of the primitive, the picturesque and the sublime–and often found the foreign, and the unsettling, surprisingly close to home."
Source http://curioustravellers.ac.uk/en/

I am part of a group of artists based in Wales and working towards an exhibition in Oriel Sycharth, Glyndwr University at the end of 2016.

The topic has special importance for me as I wrote about the influence of 18th.Century ideas of the Sublime on British landscape painting in my B.A. dissertation, and I live in the area of North Wales through which Thomas Pennant travelled. And I walk a lot, and draw while doing so.  Since starting to read Penneant's "Travels in North Wales,1770" I have discovered that on one occasion he actually passed through the village where I live.

So....the plan is to walk (probably in stages) from Gwytherin to Llangernyw to LlanfairTalhaearn, drawing  along the way; collecting bits and pieces; taking photographs and accumulating enough stuff - sorry, resource material - to workup into another long scrolled mixed media piece.
I have the sketchbook...

First Day:  Thursday, October 8th.
Reconnoitring the route from Llansannan.
A real Indian Summer's day, although Thomas Pennant might not have used the expression.  I see that the older English term was "St. Martin's Summer", although St. Martin's Day is in November.  The Welsh phrase "Haf bach Mihangel" (Michael's little summer) is much more appropriate, as the feast of St. Michael and all Angels is at the end of September.  Michaelmas, and so on.
The official Curious Travellers blog is at http://curioustravellers.ac.uk/en/a-pre-blog-blog-thomas-pennant-in-north-wales-but-not-exactly-in-snowdonia/  but here are some more images.

A gentle meander around Gwytherin and environs, from the direction of Llanrwst.  This involved driving over some very bleak moorland:  haven't been here for ages, and it's grown a windfarm (but not much else).  Descending into Gwytherin, the sun was shining and it might have been a different planet.

More here:  http://curioustravellers.ac.uk/en/thomas-pennant-in-north-wales-second-day/
And some photographs:

Third day, October 10th.
Today, I walked the moorland stretch from the high road out of Llansannan along the Pilgrim's Way to Gwytherin.  Sadly, there are a lot of "black and horrid Caverns" around this part of North Wales, and I have mis-identified the one Pennant described on the River Aled.

One of the fascinating things about researching this project is the discovery of just how many farms there are on the apparently barren moorland:  they are out of sight, but they are there - and they were there in Pennant's time.

An interlude.
Dr. Mary-Ann Constantine of the University of Aberystwyth gave the Cymdeithas Thomas Pennant Society of North Wales 25th. Anniversary lecture in Holywell on October 15th.  This was a fascinating and lively account of "Pennant's Women", from his family to his correspondents, obscure and famous.  I had actually heard of some of them, which was encouraging.  I must read more about Mrs. Piozzi (previously Thrale) who was a friend of Dr. Samuel Johnson, and is said to have prompted his famous remark about second marriages being the triumph of hope over experience.

Day four, October 16th.
Another reconnaissance between Gwytherin and Llangernyw, with a detour up the valley of the River Cledwen. 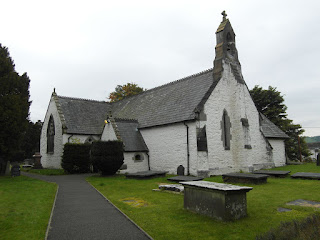 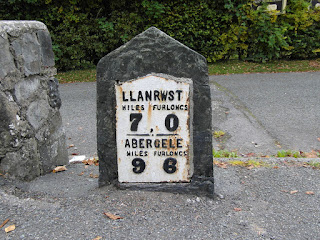 January 25th., 2016.
A bit of a gap.....  after the wettest December on record we now seem to be headed for the windiest January, with a short burst of heavy snow on the 15th.  The latter led to the cancellation of a planned meeting of artists in Stiwdio Maelor, Corris. So, back to work on my own.

March 12th.
Back in the studio agane (with apologies to Geoffrey Willans and Ronald Searle)
At last the weather is improving and the days are getting lighter, later.  It is also a little warmer, and the studio has dried out somewhat.
During the winters I usually end up drawing bones in the living room; in the summer I walk, and draw - necessarily more "abstract" work, drawing ideas and recollections rather than objects.  The two activities feed into each other, but sometimes feel very separate.  There is a constant tension between figuration and abstraction (I may have mentioned this before...) which tends to produce completely distinct bodies of work.  I think I might invent an alter ego in order to get the more "realistic" stuff seen publicly.
However:  it's good to get back to the Thomas Pennant project, drawing the Llansannan section of last autumn's walk.  The drawing is on too large a scale to attempt it in the house; in common with the Dyfi Valley piece (see the post from 12 months back) the paper is yards long.  The format seems right for recording a walk, but I can work only by rolling it up on a lath suspended from the studio ceiling.  Today I managed about four feet's worth.  Today's instalment has come out a bit more formal than the last effort, so some adjustment of the various elements will be necessary once I reach the end of the roll of paper. 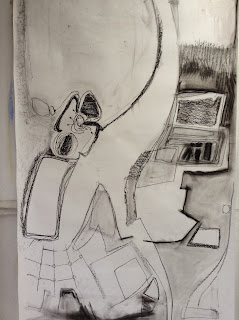 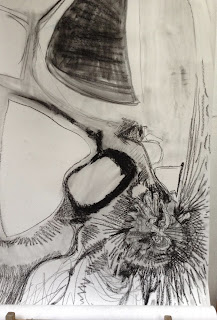 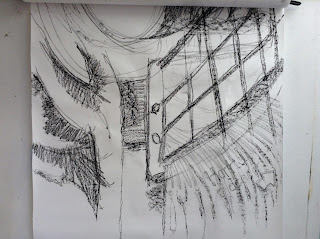 March 25th.
Sunshine and the Romantic Imagination
A beautiful and genuinely Spring-like day today:  frosty at 6a.m., followed by warm sunshine and a light breeze (unfortunately the latter is due to strengthen, bringing poor weather for the rest of the weekend).  Just the sort of day for setting off on foot to nowhere in particular.  So, I set off in the car to go to Machynlleth, about sixty miles away.  All well and good at first, with a pair of red kites circling in the blue sky over the short section of the A5 between Cerrigydrudion and the Bala road.  However, as it was Good Friday, everyone else wanted to be out and about on the roads too: there are definitely too many cars (including mine) in the world.
"Is your journey really necessary?"  -   well, yes, as we had a meeting of Curious Travellers in Y Tabernacl, MOMA Machynlleth.  Our previous attempt to meet in January was thwarted by a sudden snowfall, so today's weather was a real blessing.  It looks as if the group is really going to "click" - everyone has a different approach, but we have a mutual enthusiasm for the land and its' layers of meaning.  We had a comprehensive discussion about our ideas, and mopped up each others' information like the proverbial sponges.


And then .... up from the café and into the exhibition "Romanticism in the Welsh Landscape".  This is a phenomenal collection of work, curated by Dr. Peter Wakelin, and generally voted the best show in town by the Curious Travellers.  The work spans nearly three hundred years, and the selection is both eclectic and comprehensive.  The subdued lighting required to protect the older colours adds somewhat to the mystique:  I was intrigued by a little eighteenth-century view of Castell Coch by the wonderfully named Julius Caesar Ibbetson.  Seen through the gloom, the obligatory figures in the foreground, pointing up the Picturesque-ness of the composition, are freely painted but detailed down to the lace caps under the ladies' black hats.  The stand-out piece is the whole exhibition is "The Wave" by Glenys Cour, whom I am ashamed to say I had not encountered before.  Her colours are intense and layered, exerting an almost hypnotic effect under the high light levels allowed for the contemporary pieces.
On her website, Peter Wakelin describes her work thus: "Yet however much Glenys Cour’s approach is based in the world around her, her saturated hues are other-worldly, and her compositions are mystical and hieratic"

Absolutely spot on.
The exhibition continues until June 18th., and I shall be back for another look.

The Curious Travellers exhibition will take place in Oriel Sycharth, Wrexham between October 10th. and December 16th., this year.  This is my journey so far... 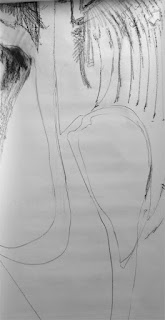 February. March, April, May......
Silence on the blog does not actually mean complete inactivity.  The highlight of the last three or four months has been the "Power of Place" conference at MOMA Machynlleth, accompanying the exhibition on Welsh "Romantic" art.  http://curioustravellers.ac.uk/en/the-power-of-place/
My first drawing is almost finished, and the walking season has definitely started again.

April 15th.
Thinking....mostly.
With the (slightly) warmer weather, I have been into the studio more often than not over the last few weeks.  By luck as well as a certain amount of judgment, the drawing recording my first walk from Llansannan to the bottom of Pennant's "horrid descent" and back again has taken me to the end of the paper.  It is getting to the stage where I will need to find somewhere to unroll it, inspect the whole thing and decide what needs to be done to "pull it together".  So the first thing to think about is Where?  And then What? and How?

Getting on with drawing number two, heading down to Gwytherin from the "black" moors.  "Black" as in "dismal" rather than "reflecting no light" ?  (Thank you, Chambers' Dictionary).  Certainly the area can be a bit bleak, but my visit last year was lightened with a long close-up view of a red kite circling above me while I ate my lunch.

October 5th.
A busy and productive trip to Wrexham at the beginning of the week - although I wasn't expecting to be there for quite so long.  A bunch of Curious Travellers made the journey to Oriel Sycharth from a' the airts, some travelling for considerable distances.  I am relatively fortunate in living only an hour and a half away from Wrexham, but some had a journey time of over three hours in each direction. 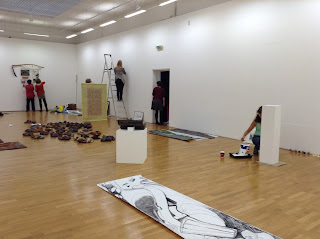 As the work was being brought in, the gallery seemed to fill up completely, but the space swallowed the large pieces once they were on the walls.  This is the first chance I have had to see my own drawings in their entirety - usually I just see about a metre and a half at any one time, with the top and bottom rolled up.  The drawing flows nicely and works as a whole, which is gratifying, but I was surprised at how many representational elements it contains.  In my head, the whole thing was abstracted from the journey rather than illustrating it.  I'm not sure whether the finished article is quite what I intended - but it seems to work.  Certainly the drawings look spectacular hung from the top of the gallery wall - no credit to me, as I couldn't face the high ladder.

Next up:  Private View on Monday, 10th October. 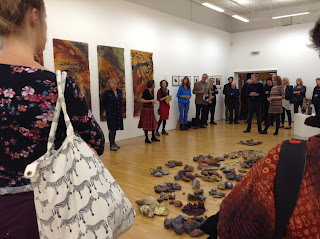