Work in progress for CAN collaboration

Collaborating with Tara Dean & Lynette Howells-Moore.  We have met on a couple of occasions, and went on a long walk around Rhuddlan in February 2012.  Rhuddlan is an historic town on the River Clwyd in North Wales, the site of one of the first castles built in North Wales by Edward I of England.  To this day, the town contains echoes of the strife and colonisation which led to its' foundation; the old Parliament house with it's ancient window & door, now blocked; the straight banks of the river, re-routed on the King's orders to provide a navigable channel to the castle.  More recent empire-building by supermarkets on the outskirts of the neighbouring town has led to mass closure of shops in Rhuddlan, which is now home to countless beauty parlours & tanning salons.
My work for the collaboration is based on the "walking drawings" I made as we walked through the town to the castle and church (via a teashop!).  These images are of work in progress: drypoint etchings of my drawings, to be made into a book recapitulating the walk. 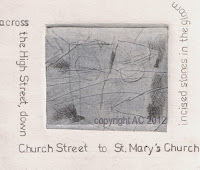 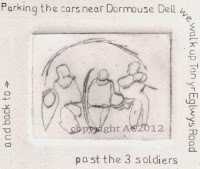 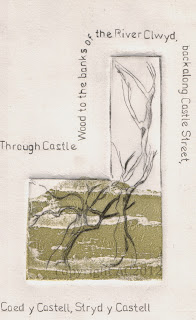