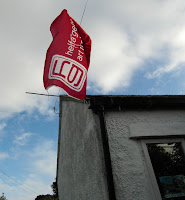 Helfa Gelf - The North Wales Open Studio Network summer event - has finished for 2012, although the exhibition at Oriel Pendeitsh, in Caernarfon, is continuing until November 1st.
Informal comments from colleagues suggest that the event has been rather quiet this year, with fewer visitors.  I suspect - although I have no evidence - that this might be a "dilutional" effect of the increased size of the event.  After all, there must be a finite number of people who are interested enough, live close enough and are able to travel around North Wales looking at art.  I had about the same number of visitors to my studios as last year, but only because I had a small bus load of children from the Oriel Mostyn Criw Celf (who were delightful).
Sales of artwork were definitely not as good as last year, but personally I don't feel that this is the main reason for opening my studio to the public.  When I visit other studios I am interested in hearing the artists talk about their art, and I want to discuss "process" with them, and see the paint (or clay, or cameras or whatever they're using).  I don't want a conducted tour round an art gallery in an uncongenial space and I definitely don't want to be subjected to the hard sell.  My preference is for contemporary art rather than watercolours of tigers copied from photographs....

So, here's to next year (assuming I get selected).