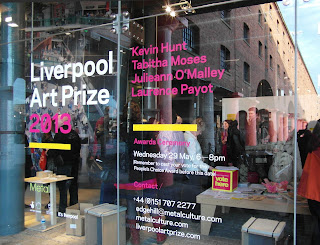 To Liverpool yesterday for the opening night of the Liverpool Art Prize, apparently housed in a former insect museum on the Albert Dock.  Well, certainly on the Albert Dock, and an interesting semi-industrial space with dark corners and lots of bare brick and ducting.
Four outstanding Liverpool artists have been selected for the prize, which will be awarded on May 29th.  The work on display was varied and interesting although, as always at these events, difficult to see through the press of people.  So, a good excuse to go back for a second look and a scout around the rest of the events on during Liverpool Art Month.
Kevin Hunt, as always, has produced deceptively simple work which is actually intellectually rigorous, interrogating the space around the pieces as well as investigating notions of construction and deconstruction.  Tabitha Moses' stitched pieces have a lingering pathos, requiring the viewer to reflect on sadness and loss.  Julianne O'Malley's work is a brave and stunning tableau incorporating her own body lying under a suspended batterie de cuisine of vicious-looking knives, with a trompe l'oeil thoracic evisceration.  Laurence Payot invites the audience to become the artwork, stamping prefabricated symbols on their hands and forcing them to confront a giant digital collage which challenges the gallery space.

(Confession of interest:  I was at art school in Wrexham with Kevin, so I send him my congratulations, and best wishes for the final selection!)