Another task completed, for now.

Hooray - I have just completed the most difficult, least favourite task of all, revising my "personal statement" for an exhibition.  I always put off doing it until the last moment, and still manage to take a couple of days to get it sorted.  Most of the time is spent on avoidance tactics: waiting for the computer to load, updating the antivirus, making cups of tea, and even doing housework.  There is something completely off-putting about having to write about painting.  To paraphrase Lucien Freud, caught unawares on television years ago (in the Serpentine Gallery?), "if I could write about it, I wouldn't need to paint it".
So back to the far more pleasurable activity of making work, and the last touches to the last few monoprints.  These are a sort of map, based on the tiny sketch in the 1852 document relating to the transfer of the land on which stands my house: " a rood and a perch, or thereabouts". That's about a third of an acre, or 0.129 hectares, according to the recent maps. 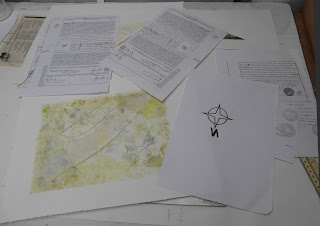 Monoprinting is a fairly high-risk procedure, given that the potential for complete disaster exists at every stage of the process.  With an etching or relief print most of the work goes into making the plate, and you're generally fairly safe once it's completed.  Any failures of printing can be replaced with another piece of paper until the edition is finished, or you can pretend you only ever meant to do an edition of 17. A monoprint can be wrecked at the last minute, and, by definition, there's only one. One solution is to work on three or four similar images at once, but even then something seems to happen to the "best" print at the last stage. Perhaps that's part of the fun?